Many people, regardless of their age, feel their ears are too prominent. These self-conscious feelings can cause anxiety, embarrassment and in some cases psychological distress.

Children with excessively protruding ears are often the subject of ridicule at school that can affect their self-esteem and confidence for the rest of their lives. Being bullied or teased because of common “sticking-out ears,” can leave lasting wounds on the emotional well being of your child, and negative self-image can often lead to changes in mood and behavior.

Even adults with protruding ears often feel embarrassed about their appearance. In many cases, this anxiety affects everyday life from the office to social engagements or even romance.

While headgear or helmets can help to reshape the ears, many patients do not feel this is right for them. The long-term effort and imposition on their regular routine can be even more stressful than living with their current condition.

Many adults who struggle with prominent ears that “stick out” and detract from their faces often wish to alter their ears to achieve a more harmonious appearance. Dr. Sajjadian is here to help.

We believe firmly that everyone, child and adult alike, deserves to feel and look their best without the worry of what others may think. Dr. Ali Sajjadian is a highly-skilled, triple board-certified plastic surgeon with special expertise and skill in performing otoplasty, known as ear reshaping.

Otoplasty is an advanced cosmetic surgery procedure that alters prominent or asymmetric ears to give patients the looks they desire. This one-time procedure delivers lasting results with relatively short recovery time. Call us at (949) 515-0550 or complete our online form to meet with Dr. Sajjadian.

A Guide to Otoplasty

About the Ear Reshaping Procedure

Dr. Sajjadian meets with patients on a one-on-one basis prior to the procedure to evaluate their initial condition and understand their concerns and desires. During the consultation, he creates an individualized treatment plan to address all of their needs and yield outstanding results. Dr. Sajjadian performs two types of techniques, depending on the patient’s unique needs. The first technique involves creating a small incision in the back of the ear and carefully extracting and reshaping cartilage to reposition ears closer to the head. The other technique does not require cartilage extraction and instead removes the skin from the back of the ear to achieve the desired look. Dr. Sajjadian may use dissolving stitches when repositioning the ears to help the cartilage heal and maintain its proper position.

In some instances, Dr. Sajjadian may need to perform reconstructive cosmetic surgery to treat ears that have been damaged and malformed due to trauma. Dr. Sajjadian performs cosmetic ear reshaping on both ears even if only one ear is malformed to ensure symmetry.

Ear reshaping is performed on an outpatient basis, allowing most otoplasty patients to return home following the procedure. Patients can undergo otoplasty as young as four or five years old when the ears have become fully developed. In fact, Dr. Sajjadian recommends patients undergo ear reshaping while young because the cartilage is more pliable, allowing greater flexibility in ear reshaping. 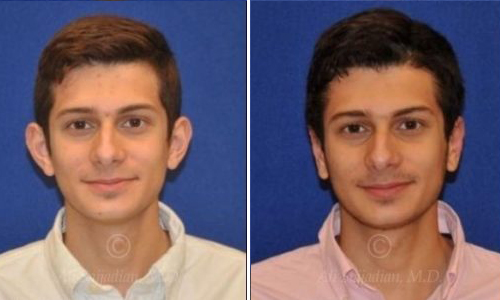 As a triple board-certified plastic surgeon, Dr. Sajjadian has helped thousands of patients reach their aesthetic goals using the most advanced techniques and upholding the highest quality of patient care. Voted as one of “America’s Top Physicians”, Dr. Sajjadian takes pride in educating his patients and achieving natural results.

Otoplasty Procedure – What to Expect

Ear reshaping is a highly effective procedure with relatively few complications. Dr. Sajjadian holds the expertise and extensive experience in otoplasty that few can surpass. His outstanding surgical record makes his Newport Beach and wider Orange County otoplasty patients confident and comfortable in his hands.

Dr. Sajjadian performs all procedures at a state-of-the-art surgical suite, which is fully equipped with some of the most sophisticated technologies on the market. Following the procedure, patients typically require a few days to a week of rest before being able to return to their daily activities. Dr. Sajjadian will dress the ears in a relatively thick bandage in order to maintain the new position of the ears, as well as promote a quicker recovery time.

Dr. Sajjadian is one of the few plastic surgeons in California to be board certified in three disciplines of plastic surgery, as well as reconstructive surgery and otolaryngology-head and neck surgery. This extensive education and experience give him a thoroughly deep and complex understanding of facial plastic surgery that few cosmetic surgeons possess.

Amazing results and Dr. Sajjadian was helpful and responsive throughout the entire process. Would definitely recommend to anyone looking for great results!

I spent a lot of time researching and interviewing surgeons and Dr. Sajjadian stood out the most. Aside from his admirable credentials, he is genuine and cares.

Dr. Ali Sajjadian and his surgical staff offer attentive, compassionate care within a nurturing environment that produces beautiful results. Dr. Sajjadian works meticulously to conceal visible scarring and promote a healthy recovery. Several types of financing options are provided to allow patients from all financial backgrounds afford the procedure. To learn more about ear reshaping with Dr. Sajjadian, and to schedule a consultation, contact his office today.

Dr. Sajjadian recognizes that each patient has unique aesthetic desires and expectations. To meet the needs of all of his patients, he offers a range of advanced facial enhancement procedures, including rhinoplasty, brow lift and eyelid surgery. For individuals who require a more comprehensive surgical approach, he also offers facelift, facial implants, and neck lift.

On average, the outer ear is positioned at an angle of about 20 to 35 degrees from the side of the head. However, if the ear angle is greater than 35 degrees, it is considered to “stick out.”

This condition is often genetic and may run in families, though it is seen with relative frequency as a random occurrence as well. Protruding ears should not affect a person’s hearing, though it often is a source of anxiety or discomfort.

Around five percent of the general population is affected.

There are a number of causes:

Cartilage Overdevelopment: If the pinna, or the upper edge of the ear, has an abnormal amount of cartilage, it is more likely to be prominent in appearance.

Cartilage Underdevelopment:Alternatively, if the cartilage at the upper ridge of the ear does not develop fully in childhood, it can lead to the ears sticking outward rather than folding in toward the head.

InjuryInjuries may result in prominent ears.

Patients will need to wear ear bandages for several days post-surgery. During this healing time, they will be unable to wash their hair.

Once the bandages are removed, a supportive but nonconstricting headband should be worn at night. This helps to remove any tension from the ears themselves.

It is recommended that the headband be loose to prevent any discomfort or pulling of the ears if the patient moves in their sleep.

Within a week of surgery patients can return to work or school. Within two weeks, patients are able to return to regular activity and exercise. Though Dr. Sajjadian recommends avoiding activities that may cause trauma or injury to the ears during recovery, such as contact sports.

Swimming should be avoided for up to eight weeks. After three months, patients may reengage in a full range of activity.

How do I know if I'm a candidate for otoplasty?

Most healthy, nonsmoking patients age five or older with no ear infections are good candidates.

What is cauliflower ear? Can otoplasty fix this problem?

Cauliflower ear is the nickname given to trauma of the ear that results in deformity. Although it’s a complex condition to treat, otoplasty can improve appearance in many patients. Dr. Sajjadian will discuss realistic expectations in your consultation.

I have one ear that is bigger than the other. Can otoplasty treat this?

Although no one’s face or head is entirely symmetrical, otoplasty can help make your ears more proportional to each other and your head overall.

It otoplasty safe for children?

Yes. Starting at age four or five, when the ear cartilage has stopped growing, children can safely receive otoplasty surgery.

Can the results of otoplasty "wear off"?

The results of otoplasty are permanent. It’s critical to choose a licensed, board-certified plastic surgeon to get the best possible outcome.

How much does otoplasty cost?

The cost of the otoplasty procedure is unique to each patient. In your consultation, Dr. Sajjadian will review your specific costs and financing options.

Can a previous otoplasty be revised?

Yes. Unfortunately, not all physicians possess the same level of skill. Again, using a board-certified plastic surgeon, such as Dr. Sajjadian, is your best bet.

How should my ears look?

Ears that protrude from the head at an angle of 35 degrees or more are considered to protrude. That said, the decision to have plastic surgery is highly personal and should never be done to adhere to someone else’s beauty standard.

Is recovery from otoplasty painful?

Any soreness from the surgery subsides steadily over the first week of recovery and is usually manageable with over the counter medicines. Patients can also minimize pain by avoiding sleeping on their ears.